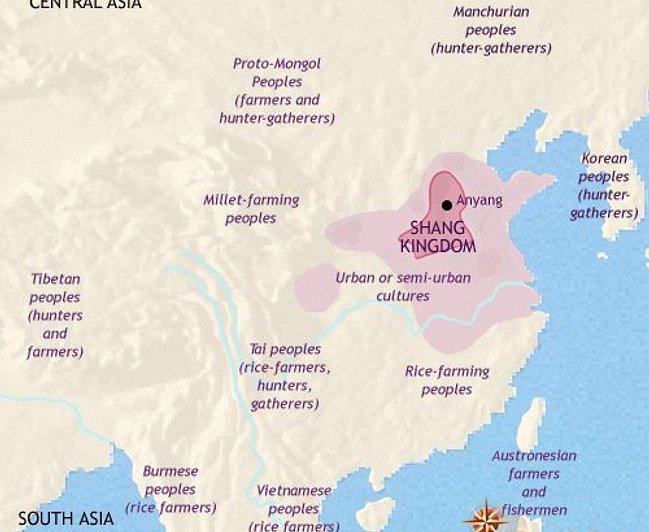 Civilization developed independently in East Asia around 1000 years after the first city-states emerged in Mesopotamia. By about 2000 BCE, various kingdoms had emerged in the Yangtze and Yellow river valleys of what is now eastern China, ultimately united under the Shang Dynasty.

Civilization in East Asia followed a different pattern than in Southwest Asia and North Africa (also known as the Middle East). Rather than a multi-polar world, where various civilizations competed against one another, ancient China's was typically unipolar, with a central civilization orbited by vassal, or subservient, states, culturally and even politically. Chinese civilization differed as well in its cyclical nature. Great leaders, often at the head of powerful families, emerged to consolidate rule as a dynasty, only to see that dynasty gradually fall to centrifugal forces over centuries, leading to typically shorter period of chaos, until another great leader and dynasty emerged. But these chaotic periods between dynasties were not necessarily culturally backward ones. The so-called "warring states" period of the second half of the first millennium BCE, between the Zhou and Han dynasties, saw the development of the three great schools of political and social philosophy in Chinese history--legalism, daoism, and Confucianism. (These will be discussed in more detail in week 14.)

Lectures: (all lectures and quizzes are now only available on Blackboard)