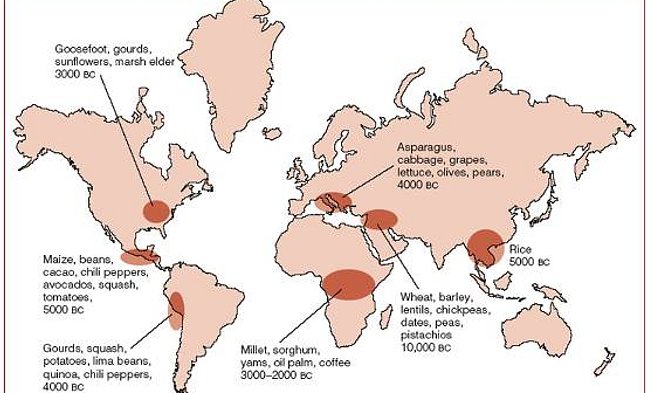 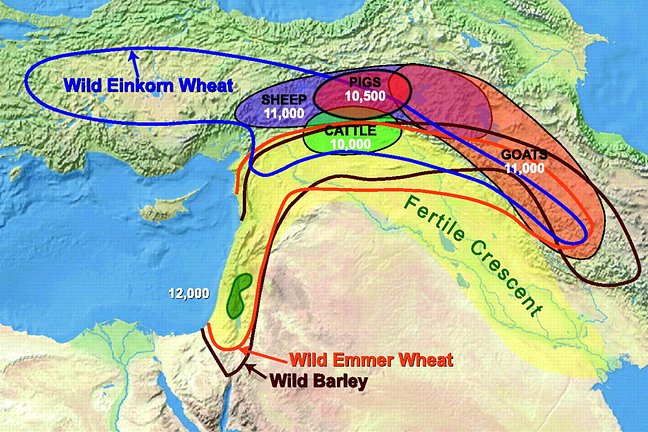 The first agricultural revolution emerged 10,000 to 12,000 years before the present (YBP) in a region of what is now the Middle East, known as the Fertile Crescent. As the map above shows, the Fertile Crescent, generally consisting of flat and well-watered terrain, stretches from the shores of the eastern Mediterranean up through southern Anatolia and southeastward through Mesopotamia. (Some maps also include the nearby Nile Valley of Egypt as part of the Crescent.)
As the map below indicates, however, there were several independent agricultural revolutions across the world between 10,000 and 2,000 BCE.

The agricultural revolution was the second of the great revolutions in human development, following the so-called cognitive revolution roughly 60,000-90,000 years previously and preceding the Scientific Revolution that came about roughly 500 years ago. The agricultural revolution allowed for a great expansion in population and the development of civilization. In a sense, it accelerated human development, by allowing us to evolve culturally at a far greater speed than was possible biologically, through natural evolution. But the revolution also separated us from nature and, in a sense, made us slaves to the crops and animals we domesticated. Early agriculturalists had to work harder for their bread than forager/hunters typically had to do for their sources of sustenance, and for a less nutritious, more monotonous diet. But once agriculturally-dependent populations had grown beyond the capacity of the land to feed them naturally, there was no turning back.

Sweat of Our Brows:

(lectures and quizzes are available on Blackboard only):

Tuesday and Thursday, February 9 and 11