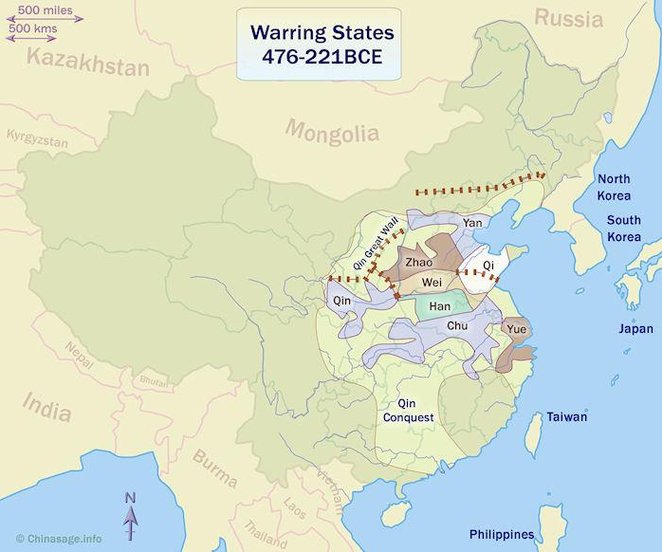 Founded in the 11th century BCE, the Zhou dynasty would technically continue until the middle of the 3rd BCE, but its last several centuries were marked by a period of instability and chaos known as the "warring states" period (see map), when powerful families ruled quasi-independent states each vying for political supremacy. While the "warring states" period resulted in suffering among the ordinary people of China, it produced the greatest efflorescence of political philosophy in the long history of Chinese thought, as various philosophers developed ideas about how rulers could attain and hold power while, at the same time, assuring the efficiency and harmony that would assure social order and prosperity for their subjects.

Three major philosophical schools emerged in this period--Confucianism, daoism and legalism. The first, based on the thinking and writings of the the eponymous sixth to fifth century philosopher Confucius, emphasized morality and duty. Social harmony could only be achieved if every member knew their proper place and role. To encourage this behavior, Confucius said, the ruler should establish social (and religious) rituals, foster virtue and always be seeking the highest welfare of his subjects. Daoism, based on the ideas of the semi-mythical philosopher Laozi (if real, a rough contemporary of Confucius') maintained that he who ruled least ruled best. A ruler should not try to direct the people but rather he should follow a path (or dao) that allowed the natural order of the universe to proceed. That would assure the greatest harmony in society and the greatest happiness for his people. Finally, legalism, its greatest proponent being the third century BCE philosopher Han Feizi, was based on the idea that neither the moral virtues of Confucianism nor the laissez faire attitude of daoism, would assure effective rule. People would do best if they had the certainty of law and order, executed with rigor, efficiency and fairness.