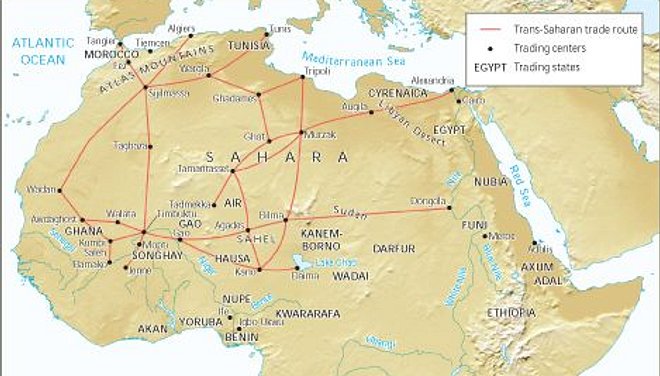 As noted in the previous week's discussion about money, trade has been an intrinsic part of the human condition since prehistoric times. But there are different types of trade. There is the local kind involving individuals swapping goods and services for money and back again into goods and services. But the kind we are going to be examining this week is long-distance trade. As is obvious from even the most cursory reading of history and geography, resources, both natural and human, are not distributed equally across the globe. Some places have more of some valuable natural resource, such as minerals or spices. Others have skilled workers, technologies, or manufacturing techniques unique to that place. Trade naturally results from this unequal distribution of resources and the desire to exploit these differences for ecoomic gain and power by merchants and governments. For much of history, most trade was either local or regional. Beginning around the year 1000 CE came more regular trade across the length and breadth of more than half the world, that is, the three continents of Afro-Eurasia. Two critical sets of trade routes emerged over the next 500 years: the so-called Silk Roads, land and maritime routes connecting East Asia with the Middle East and ultimately Europe; and the tran-Saharan trade routes connecting sub-Saharan Africa with the Middle East and Europe. Ultimately, these routes would be superseded by European-controlled, all-sea routes connecting Afro-Eurasia and the Americas. European control of these routes after 1500 goes a long way toward explaining that continent's dominance over much of the rest of the world for the next 500 years, a subject for the second half of the world civilizations curriculum--HST 1102.