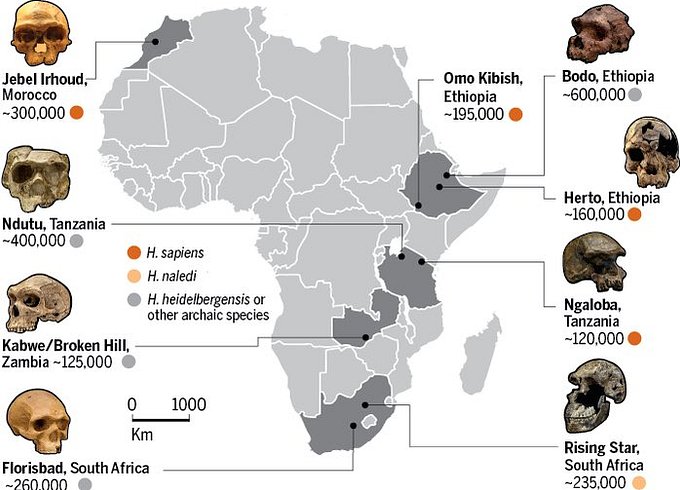 If we trace our ancestry far enough into the past, we are all persons of African descent. It is here where homo sapiens (Latin for "thinking man") first evolved several hundred thousand years ago from earlier hominid species, specifically in the long rift valley on the eastern side of the continent, now within the countries of Ethiopia, Kenya and Tanzania. As the map of archaeological discoveries above indicates, early migration brought homo sapiens to the far corners of the continent and beyond. But as the maps below show, other sub-species of human beings--including homo erectus and homo neanderthalis--co-existed with homo sapiens, in the case of homo neanderthalis (Neanderthals) as recently as the last ice age. Homo heidelbergensis in Africa is the ancestor of modern Homo Sapiens, while homo heidelbergensis in Europe and the Middle East evolved into homo neanderthalis. How homo sapiens emerged triumphant is a question hotly debated among scholars of early humanity. Some hold that homo sapiens killed off other sub-species while others believe they simply out-competed them for resources. Recent analyses indicate that most of us have small bits of other sub-species of humans in our DNA, indicating a degree of inter-breeding among these different types of early humans. (The names heidelbergensis and neanderthalis refer to the places where skeletal remains were first discovered, in this case Heidelberg and the Neanderthal valley of modern-day Germany. Other sub-species, such as homo denisovan and the diminutive homo floresiensis, refer to the Denisova region of Siberia and the island of Flores, Indonesia, respectively.)